Is this Anne Austen nee Wilcox?

Auckland Libraries has a database of over 100,000 images called "Heritage Images on Line" - it is a marvelous resource!

A search on it for "Austen" brings up this image of "Mrs Austen".  The image was taken by Herman Schmidt 1872-1959 an Auckland photographer and is dated 1910.

In 1910 Anne Austen was living in Nelson Street, Auckland, at the home of her daughter Mary Jane Ward. She was a widow, aged about 68.

We have very few images of the Austen family and none of the Captain. Sadly there do not seem to be any family albums.

We cannot be sure this is Anne but in the photograph she is wearing a small "anchor" brooch - very suitable for the widow of Master Mariner.

Her calm and lovely face looks like a woman who has lived and loved well. We do hope she is "ours"

And there is a strong family resemblance to descendants of both the Wilcox and Austen families.


The library's collection of around 26,000 glass plate negatives taken by Schmidt was saved from the attic of a building about to be demolished in Queen Street, Auckland. This may account for the damage to the image.

John Austen's wife was Anne Wilcox. She was born in Somerset about 1842 to Hannah and James Wilcox and came to New Zealand, according to her death certificate, when she was one year old.
In the early days of New Zealand it was not required that babies be registered but we know Anne had a sister - Elizabeth who was born  around 1843. And we have a record for a brother John Bailey Wilcox,  his baptism is entered in the St Paul's, Auckland Baptism Registry. He was born on the 29th November 1844. There may have been two other sisters - Hannah and Susan. 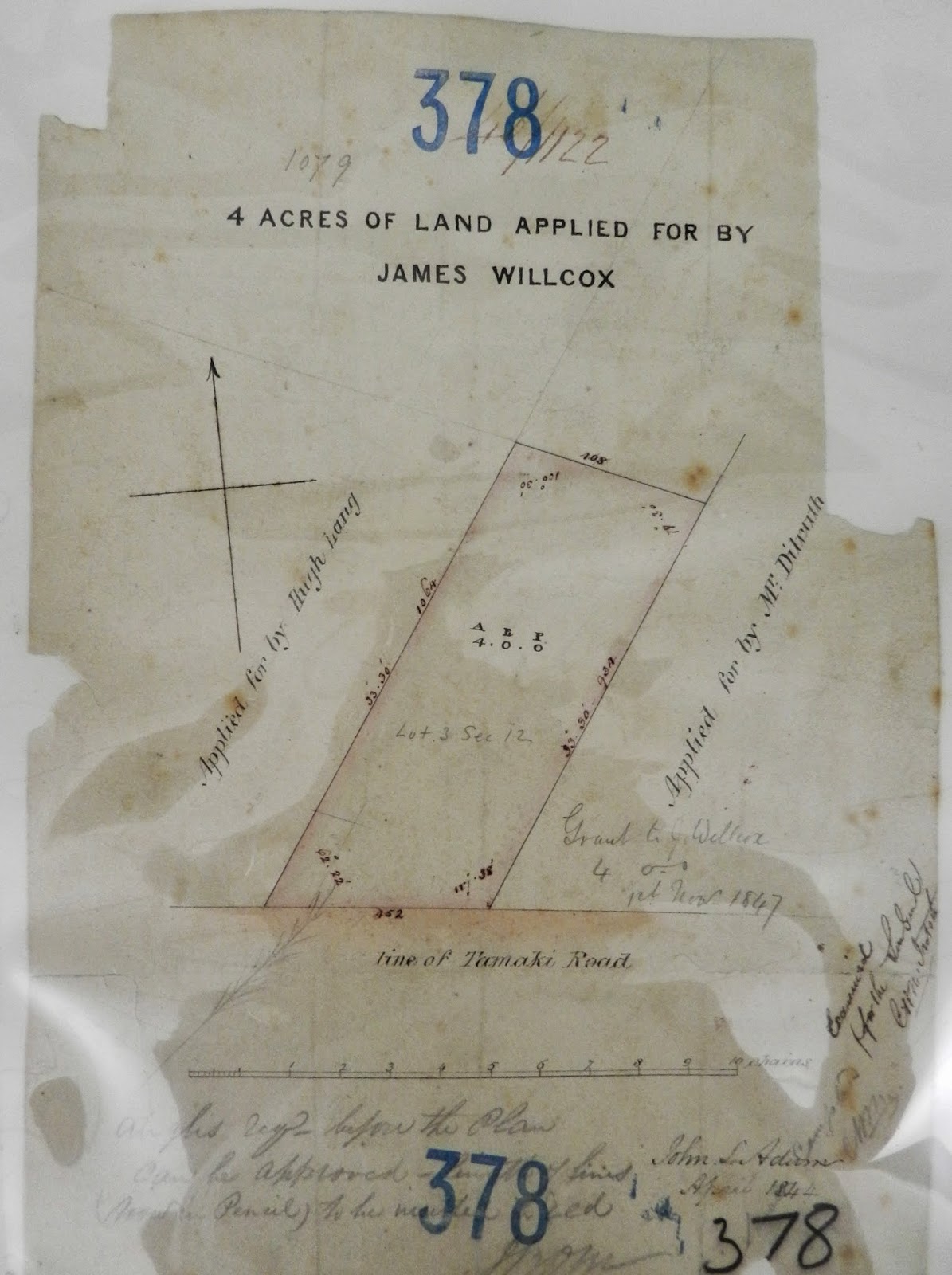 James Wilcox was a labourer and is listed in the Auckland Police Cenus of 1845, there is also a land record in the Auckland Archives - 4 acres applied for by James Willcox, 1847.
He died in 1861.


Anne's sister Elizabeth married Samuel Churches in 1863 and gave birth to Edward George in 1866 and Charlotte Annie in 1867. Elizabeth died in 1867 possibly giving birth to her daughter.

Hannah is listed as living in Parnell in 1870 when she registered the birth of Anne's daughter, but by 1871 she had died of TB.
There was a death notice for her in the New Zealand Herald 23 June 1871 which read:

And in another twist there is a crew list for the Reliance (John Austen Captain and owner) when she entered Sydney on 4 November 1867. On board were  Samuel Churches - Cook and Steward from Somerset and John Wilcox A.B. (able bodied seaman) from New Zealand.

The Reliance was shipwrecked on the 22nd April 1868. It is not known whether these relatives of Anne's were on that journey too.

John's last English journey (we have a record for) is arriving in London on the Maderia Pet on the 6th January 1854.
On the 11th May 1855 John purchased a 32nd share in the schooner Christina in Auckland, New Zealand.
We don't yet know how he got to New Zealand.
Posted by juliana and Greg at 7:11 PM No comments:

According to the 1841 UK census the Austen household comprised:

They lived in Pump Street - possibly in this house. 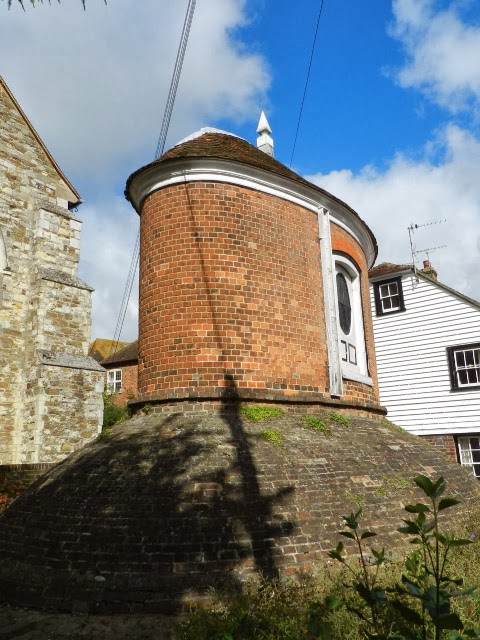 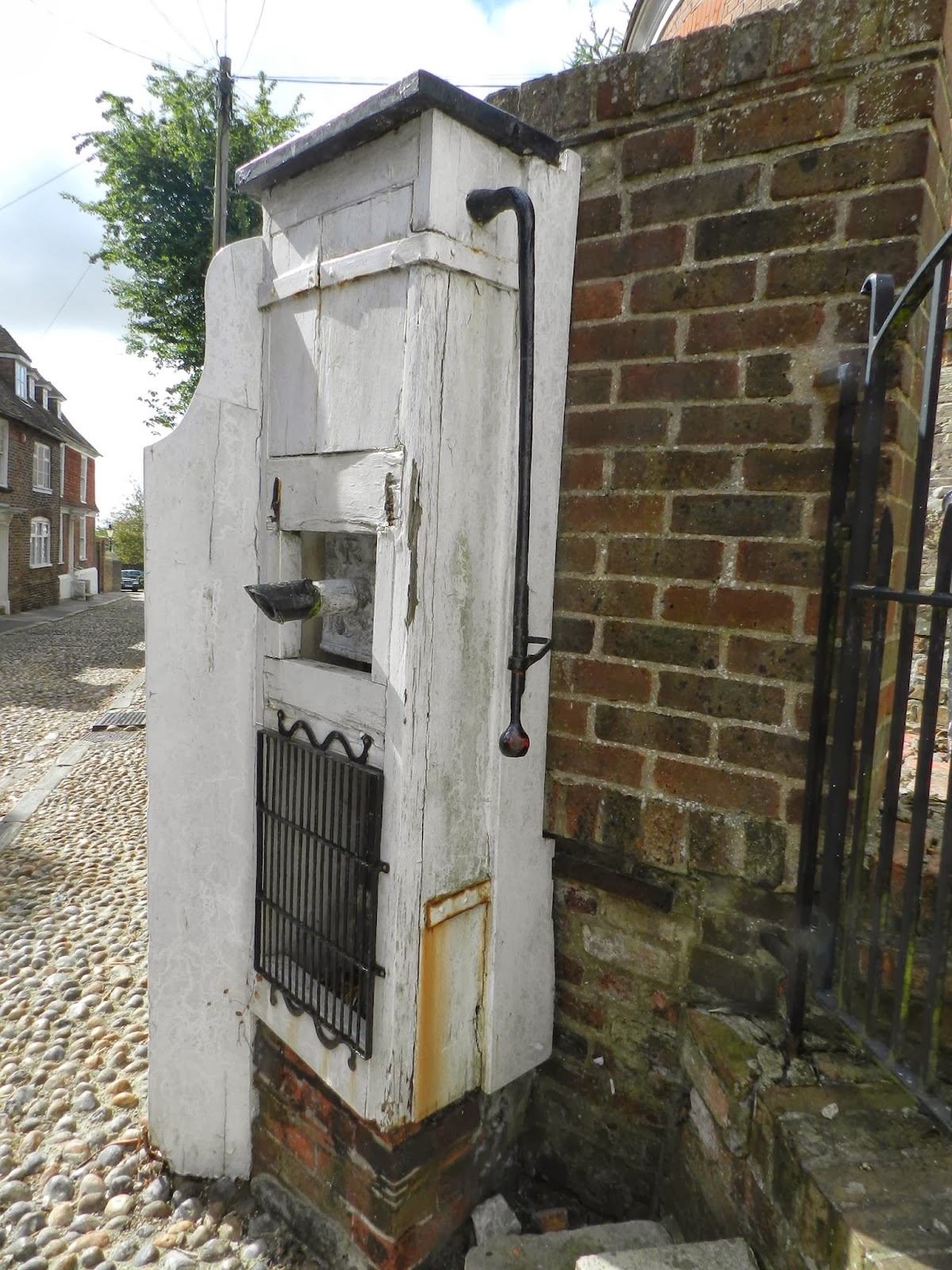 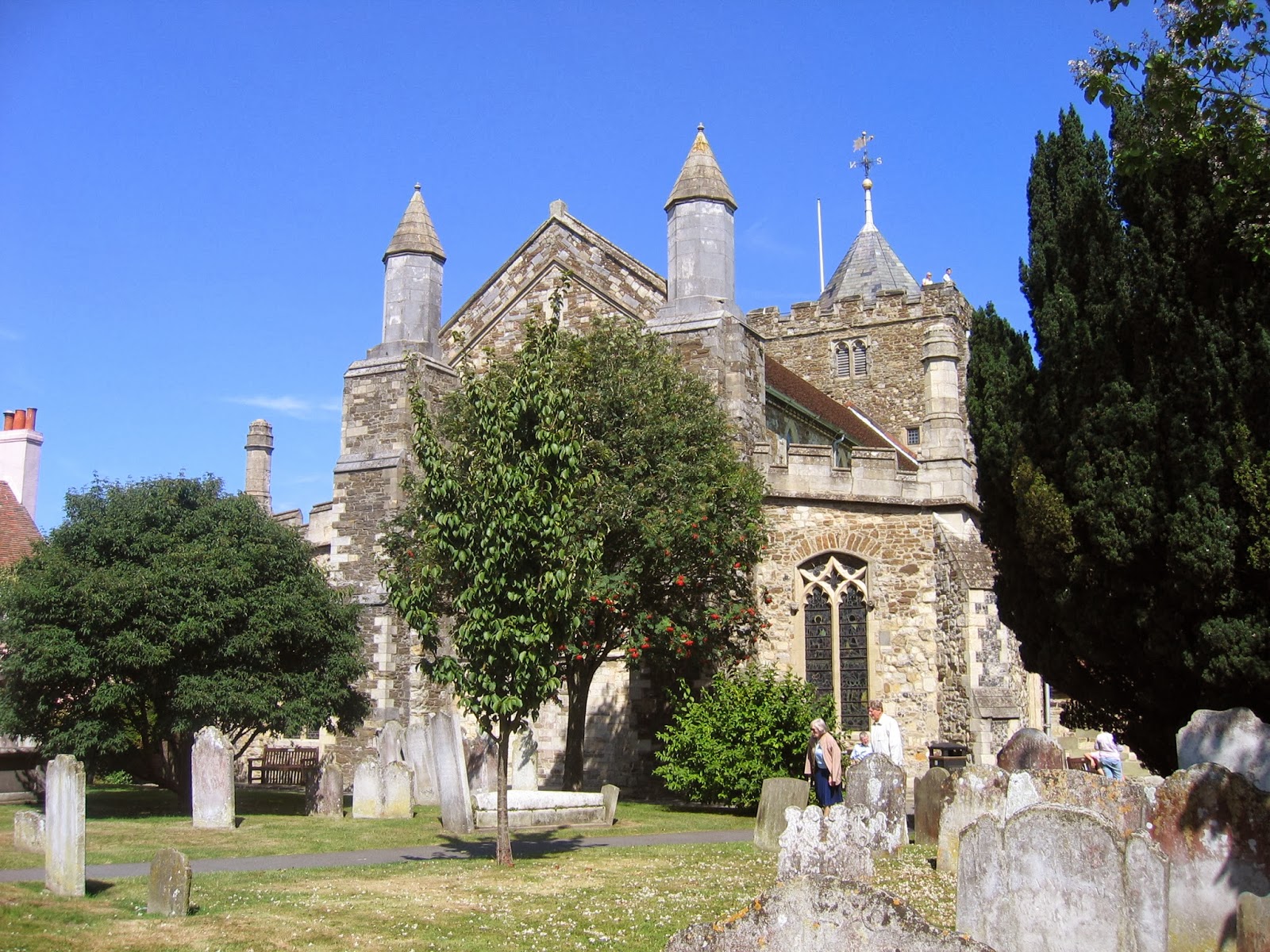 Pump Street is adjacent to the church of St Mary the Virgin. The water house or cistern that gives the street it's name was erected in the churchyard in 1735 to increase water supply to the township.

Posted by juliana and Greg at 8:15 PM No comments:

Some faces for the names 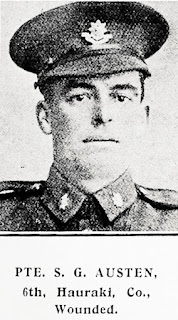 With recent additions to Papers Past and the Auckland Library "Heritage images on-line" some images of Captain John's grandsons have come to light. We still have no image of the man himself.

Sydney Frances Postlewaight was the son of Caroline Austen. This is from the Auckland Star 11 Nov 1916. 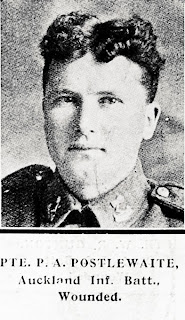 Percy Arthur Postlewaite was also Caroline Austen's son - the spelling of his name seems to have changed about the time he enlisted for the First World War. This is from the Auckland Weekly News 16 September 1915. Sir George Grey Special Collections, Auckland Libraries, AWNS-19150916-39-16
Posted by juliana and Greg at 4:59 PM No comments:

The Auckland Star newspaper has now been digitised up to 1926 and is available of Papers Past - this is an absolutely fabulous resource. Arthur Austen is frequently to be found in its pages - a talented comedian, M-C and fancy dress competition judge. 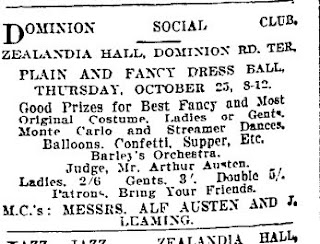 Working with his brother Alf! 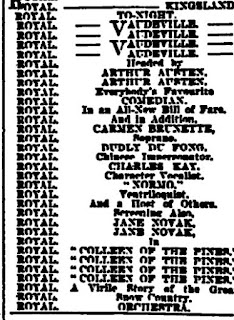 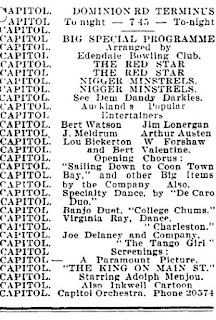 Hmm - vaudville! Arthur was a member of the Fullers Vaudeville troop. 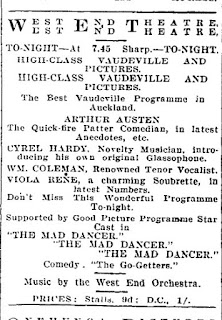 Cyrel Hardy - that "novelty musician" was to continue his career as a magician - "Handini Hardy". His niece was Lilian Jean Hardy who married Arthur's son Mervyn (Greg's parents!)
Posted by juliana and Greg at 9:25 PM No comments:

Lessons from a Sexton

sexton (skstn)n. An employee or officer of a church who is responsible for the care and upkeep of church property and sometimes for ringing bells and digging graves. On a lovely Autumn day we took another visit to the Waikumete Cemetery. We were extremely fortunate to have a trained sexton help identify the Captain's grave. (Usually you need to make an appointment for this wonderful service) 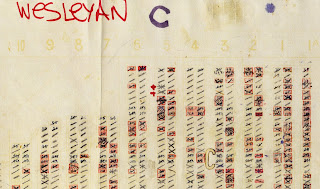 This is the burial map for the Wesley C section of the cemetery. The graves are laid out very exactly with all the bodies in the cemetery facing East - this is so on Judgement Day they will all rise to meet the Lord. They were not quite so exact with the compass setting and they face a little more SE than due East! The Austen graves are marked on the map with small red crosses beside them. The pencilled hash marks indicate the number of bodies buried in each grave. Row 5 Plot 62 contains John James AUSTEN (1898) and William Edward AUSTEN (1911) - two of the Captain's sons. Row 5 Plot 64 (next door - it is just like a street with odd numbers on one side and even on the other) contains Captain John AUSTEN (1899), his wife Annie AUSTEN (1923) and their granddaughter Thelma WARD aged 5 weeks (1925) and her mother Elsie May WARD (1925) who died 15 days after the baby. At the time of their burial free plots were available and all the plots on this map not squared in red are free plots. This means they do not have headstones - they would have originally had wooden crosses but over the years these have disappeared. We enquired about putting a plaque on the Captain's plot but first one needs to purchase the plot at "historical" prices. These, at well over a thousand dollars, seemed quite modern! 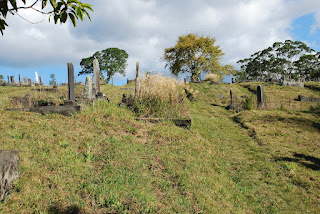 So here are the unmarked graves in the middle of the photo.
Posted by juliana and Greg at 4:38 PM No comments: